Castle Athletics alum Souleymane “Sal” Koureissi and his University of Richmond Spiders teammates are going to the Big Dance as the Atlantic 10 Conference tournament champions, having knocked off Davidson in the tournament final 64-62.  The Spiders take on the University of Iowa Hawkeyes in the First Round in Buffalo, NY on St. Patrick’s Day. 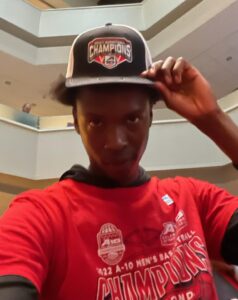 Sal played his scholastic ball at Iona Prep and, along with fellow Castle alum, Josh Alexander, is still prominently shown on the Iona Prep website.  Sal played four years for the Castle Knights, leading the team to numerous tournament championships and playing competitively throughout the country against the best talent, including a 28 point game on the top Adidas circuit.  Sal will be receiving his Bachelor of Arts Degree this Spring with a major in Sociology and a minor in Entrepreneurship.