The Castle Athletics Lady Knights traveled to Spartanburg, SC over the weekend and displayed that they are a force to be reckoned with on the Adidas Circuit. Overcoming unexpected logistical issues in getting to The Palmetto State, the teams regrouped and played strong team ball throughout the Session. The 15U squad went 4-0. The 17U team went 3-1. And the 16U unit played some tough games, and lost a key player to injury, before finishing 1-3. Coach Chez Williams of the 15U Lady Knights was nonplussed by the success. “We know that we have a very talented group of young women that can play with anyone-play great defense and team ball. The result is indicative of that.” Equally satisfied were 17U coaches Rock Rosa and Marquee Poole. Coach Poole noted that “the Castle women are some of the best and complete players in NYC. They come to practice, work hard and are determined. More importantly, they are focused on their studies and making a mark in the future. We could not be prouder.”

The Castle High School Girls continue their Spring season with the NYC Rose Classic playoffs and then on to the Gym Rat.

by Greg
351 Views00 Likes
The Castle Athletics Girls and Boys High School teams have hit the courts and are playing at the highest levels.  After dusting off the competition during the Rose Classic regular season, with each of the G15, 16, and 17U teams going undefeated, the three teams head off to Spartanburg, SC to compete on the Adidas 3SSB Circuit.  Rock Rosa, Castle Girls Basketball Coordinator and Coach of the G17U team, expects great things from his charges.  “The ladies have been practicing hard and playing well together.  They share the ball, defend well and play as a team.  We look forward to it carrying over this weekend.”
On the Boys side, the High School teams just concluded a swing down to Virginia Beach to play in the Big Shots Tourney.  There, the B17U and B15U squads went undefeated, each swiping the Championship in the Slam brackets, while the B16U made it to the semi-finals.  Herc Mejia, Boys High School Basketball Coordinator and B16U Coach, said “each time out on the court, we show we are one of the best teams and program in the country.   We look forward to taking on all competition and playing at the highest level.”
Good luck in Spartanburg ladies!

Ten Castle teams have hit the road this weekend to play in events throughout the country. The Castle Girls 15-17U teams have headed up to Albany to participate in Gym Rat Live, an invitation-only event. The 15U and 16U teams have started strong in the Rose Classic, with both teams going 3-0. Last week, the 16U Girls took down the SI Diamonds38-16, the NY Grit 56-39 and the CBC Reign 48-34. The 15U squad went undefeated the week before. We look forward to the 3SSB teams to have a great weekend in the State Capitol.

The Castle Boys High School teams have trekked out to Indianapolis for the Adidas Gold Circuit. The teams have looked sharp in their opening events and the 16U squad has already taken down its first opponent in Indy.

The Boys 11-14U teams are in King of Prussia, PA for the Adidas Jr. Exposure Series and start play this morning. All four teams have been thriving in Winter play and have bolstered their rosters through recent tryouts.

The Castle Girls 15U team started off the Spring season with a trio of games in the Rose Classic and they took care of business. Not only that, they certainly went up in class, taking on and disposing of two Girls 17U programs. First, Lady Knights played the New England Crusaders 17U team and, using solid team play, won the game 36-23. Next, Castle took on the Premier Basketball 17U squad and again won 50-45. Finishing off the afternoon, the team turned aside the Riverside Lady Hawks 15U team 46-23. Coach Chez Williams could not have been more proud of the strong kickoff weekend. “It was great to see the team come together so quickly. The passing, rebounding and defensive effort were all there. Thee was cohesion offensively and this lead to chemistry up and down the roster. We are looking forward to the season and continuing with the same effort.”

Next up for the ladies is Gym Rat Live in two weeks.

Not only do Castle coaches lead on the travel circuit, but, they also play huge roles on the collegiate and scholastic scenes as well. Coaches Dwight Shaw (Castle G16U) and Chez Williams (Castle G15/13U) just concluded their season with the Caimans of Hostos Community College. It was no ordinary season, however, as they ended as the National Runner-Ups, suffering a 65-56 loss in the NJCAA DIII Women’s Basketball Championship Game. Hostos started the tournament as the No. 11 seed and chopped down all comers before falling to the No. 1 Owens Community College. It was rematch of the 2019 championship, a game that Hostos won. Great run Shaw and Chez. Now it is time to turn to leading the Castle teams to victory!!

Castle coaches are also still leading the way on the NYC scholastic court. Coach Anwar Gladden (G12U) continues his tremendous season at South Shore High School as the No. 1 seed, when the Lady Vikings meet Murry Bergtraum in the NYC “AA” Championship on St. Patrick’s Day, at 5:00pm, at the Barclays Center. Similarly, Coach Kenny Pretlow (B17U) keeps on truckin with Brooklyn Law and Tech, as they are in the NYC “A” semifinals this afternoon against Susan Wagner, at St. Francis College, at 5:00pm. Both South Shore and Brooklyn L&T have Castle student athletes on their rosters.

Even if you are not a fan of the schools, step up and cheer your coaches and fellow Castle players on to victory!! Congratulations coaches!!

If there ever was any doubt, the mystery has been solved. The Castle 8th Grade Girls shouted it out today, “THE CITY IS MINE”. Continuing the victory trail from last weekend, in convincing fashion, the team first took down the Lady Gauchos 34-18 and then bested New Heights 52-46 to win the City is Mine Championship. This is not the first time that the Castle girls beat their fellow locals, but, this time, they reminded the others why they are now the top squad in NYC. The only thing bigger than the wins, was the trophy they brought home. Kudos Ladies!! 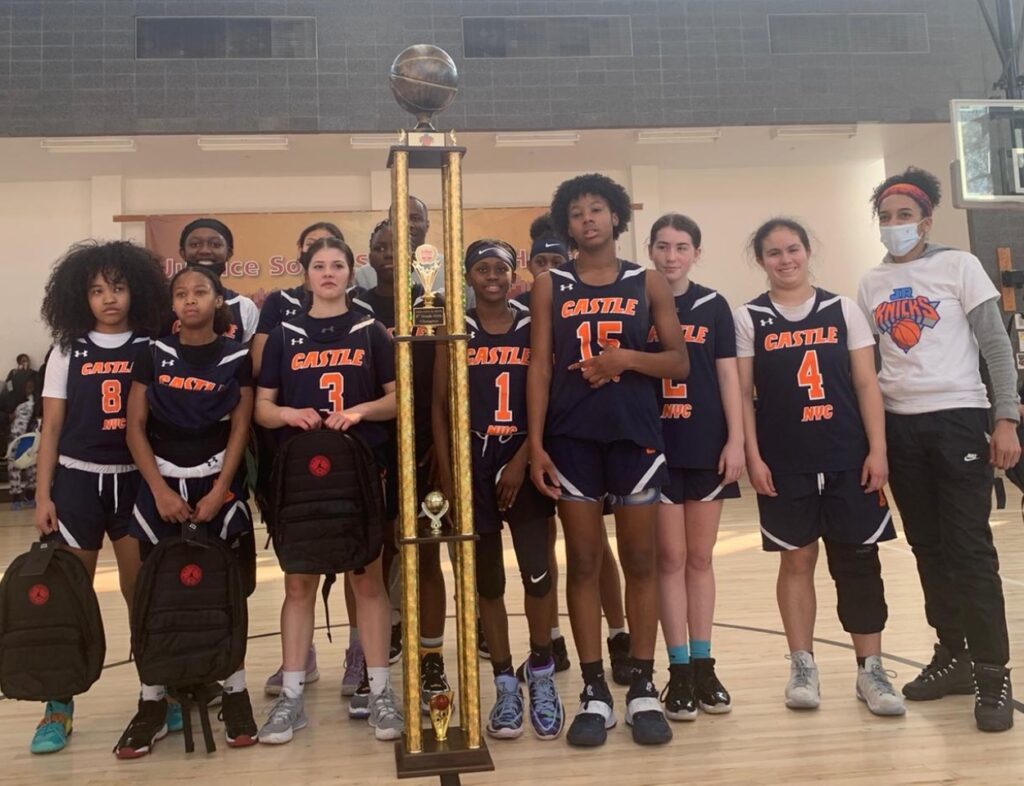